Eating out with the zombies 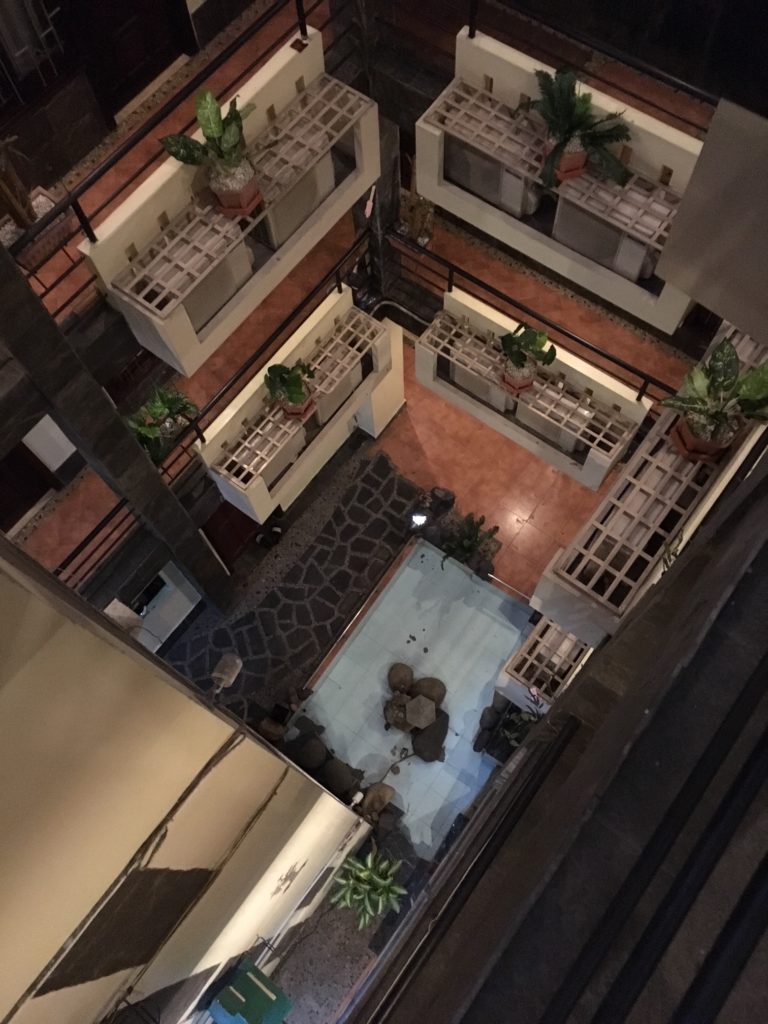 Eating out with the zombies – That night we do not dine on the street, but in a regular restaurant.
We are received by an energetic lady of about thirty-five. She guides us to our places and asks what we want to drink. That is how they are in catering establishments in Vietnam. All over the world, as far as that is concerned. Belle no longer no longer in the mood for beer and orders a red wine. So far, there is not much going on. Nothing really. And that remains the case when the young man – of whom I do wonder if he is still alive – brings us the ordered drinks. With some effort he manages to place the drinks neatly on the table in front of us. Maybe for the next time it is a nice idea to get rid of the crown cap from the beer bottle. But hey, I got a corkscrew knife for my birthday for a reason. We’ll work it out.

No, it only starts to derail when the slightly absent girl – from whom I also wonder if she is still alive – comes to our table to take our order. I already know. I take ‘hot pot‘. No idea what it is, but it sounds understandable and that is important to me. Food is like a conversation. You have to understand each other. And ‘hot pot’ and I understand each other.

As usual, Belle has not yet made her choice. She always wants to read the map from front to back first, read some parts back, make some comments, ask herself whether certain flavors fit together, if possible consult with other restaurant visitors and ask the waiter some simple questions. Such as, ‘Are the mussels from here or are they from somewhere else?’ ‘How fresh are the mussels?’ ‘Are they mussels?’ ‘How was the life of the mussels before they were cooked alive?’ ‘Can the mushrooms from this dish be replaced by the chanterelles from that other dish?’ ‘Are we talking ordinary onions, spring onions or bush onions?’ ‘How’s your sick mother?’ ‘Isn’t it time your son graduated?’Nothing special, you know. Just some questions that arise in Belle when she reads a menu. She needs a little more time before making her choice. And she just hasn’t reached that point yet. As for the main course eh. Because at my insistence she chooses a starter. That will be the fried vegetables. I choose the dim sum. Oh yes, and just add a glass of wine and a beer. Is the wine finished? Then just do a vodka.

The smell of someone who has been dead for weeks

This time we have to wait a bit longer before the order reaches our table, but luckily I need my birthday knife again to uncork the beer bottle. Apparently the learning ability of this waiter is minimally developed. Now I really start to fear that he died a few weeks ago and that people forgot to tell him so. Next time when he comes to our table i’ll smell with more notion. You should smell someone who has been dead for weeks, or not?

Meanwhile, the restaurant is filling up at a merciless fast pace. And apart from the energetic lady who greeted us when we entered, no one shows any signs of hospitality skills. At least not the already performed waiter and waitress. As far as I’m concerned, they have definitely died. But they’re still moving. More or less. They’re not alive anymore, but they’re not completely dead either. They’re undead. So they’re not to blame. It’s strange that they’ve been hired. Maybe undead people in Vietnam are cheaper than living workers? They probably don’t have to eat, so that makes a difference.

There’s an older woman behind the bar I think is the mother of the energetic lady I suspect owns this establishment. And if that’s where, then the energetic lady who I suspect being the owner of this place. And if that is true, then the energetic owner has her catering skills genetically from her father. No idea where he is, by the way. Is he in the kitchen? Did he leave because he could no longer watch the fiddling around? Or is he dead and no longer functional because he started to smell too much? At some point you have to get rid of them, huh.

The beginning of chaos

Anyway, the mother of the energetic owner doesn’t handle it very well behind the bar. I don’t think she knows the difference between a coke and a tonic. At least she doesn’t succeed in getting even one order ready in one go. In addition, the short-term memory of those two undead is thirty seconds at most. As a result, they regularly have to return to a table – which table was it again? – to ask what the order exactly was. Although they write down everything, they are subsequently unable to relate the writing and the drinks on their tray to the accompanying table. It’s a strange world.

To complete the disaster, the restaurant consists of several floors. Maybe two, maybe even more. I also don’t know how big it is upstairs, but given the numbers of people taking the stairs, I suspect it is considerably bigger upstairs than downstairs. And to complicate things further, the drinks are made downstairs by the mother of the energetic owner and brought up by the undead. While the food is prepared upstairs and lugged down by those same zombies.

The circus act is now running at full speed and the craziness is splashing off. I find it therefore not at all strange that the energetic owner is getting more and more nervous. The volume of her voice increases, she moves more and more adrift and she starts to run. Her behavior directly influences the functioning of her mother, who can no longer distinguish a glass of mineral water from a bottle of strohrum. A problem that I recognize for other reasons. The result is that orders go wrong even more often, so that the two undead have to return to their tables even more, which makes everything take longer and longer, making the energetic owner even more nervous, and so on, vice versa. The only ones who continue to function as before are the two undead. But they were actually do nothing right from the start, so that is of no significance or value.

Meanwhile, Belle and I have had our drinks for a long time and fail to order a third. But then… after a good half hour of waiting… they are suddenly there. A beautiful bowl of dim sums. That’s why it’s such a shame that this bowl ends up on the table of those two Germans who just walked in. Apparently they placed their order by telepathic means, which of course works much better with undead. Or no… wait… there is confusion. The Germans say something to the undead. He now picks up the bowl again and looks a bit soupy into space. My Buddha, there are fish that look more intelligent and characterful from their eyes. I decide to give him a hand by putting this body part in the air as if it were carnival. And sure enough. He recognizes the gesture and walks towards us to place the bowl on our table. One down, one to go. Also gives us the opportunity to order another beer and a vodka. We aalso want to pass on our choice for the main course, but then the undead is gone again. Contrary to what they want us to believe in Hollywood, zombies are not super slow but lightning fast.

Meanwhile, the panic and mess on the top floor is apparently so great that the energetic owner went upstaires. As a result, the misery below can no longer be overlooked. I don’t believe even one order ends up with the person who did it. For example, Belle and I get a Bacardi cola and a vodka tomato juice. And I see how our fried vegetables end up three tables away at three Portuguese nuns. We accept it and the nuns don’t complain either.

In the end, Belle and I decide it’s enough. We add up the costs of the drinks and food consumed, add another fifteen percent and leave the now completely desperate business.
We go to the sushi restaurant near our hotel. This restaurant is located in a small space and upon entering all tables are occupied. So we take a seat at the bar behind which two men are working like crazies to provide their guests with sushi. The nervousness splashes off. We don’t feel that everything is going smoothly. Where have we seen that before?
But there are also clear differences. In the restaurant of the energetic owner we got a drink from time to time – albeit sporadically – but here even that doesn’t work out. A girl in a white suit asks:
‘What do you wish?’
‘For starters a beer and a vodka.
”Can you come back in an hour and a half?’
‘An hour and a half for a beer and a vodka?’
‘Minimal.’
‘And the food?’
‘Can’t say anything about it. We may be closed in an hour and a half.’
‘And after that? You said “minimal”.’
‘Then we are definitely closed.’
‘Interesting. Thank you for the information.’
‘No thanks. We are there for our customers, we are there for you.’

Then let’s get to the booze

On the way back to the Caballos hotel we score a bottle of wine and a bottle of vodka to drown our sorrows. Moreover, with drink you forget about hunger. That’s how we’ve been doing it in my family for centuries. On the father’s side, that is. It is important not to create misunderstandings.

Lees ook: The Caballos hotel in the heart of Hanoi